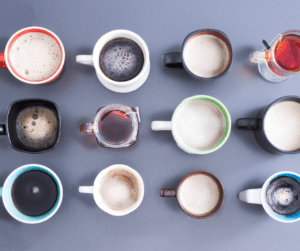 I’ve just had a friend (who is 7 months pregnant) over for coffee and a catch up.  Although my youngest is nearly 3, it’s amazing how quickly I’ve forgotten so much about being pregnant.  But the big thing I’d forgotten was having to limit your caffeine intake! Freudian memory loss perhaps?…

After she’d gone, being the inquisitive soul I am, I thought I’d look into caffeine a little more (yes, you guessed it, with a trusty cup of full-caf’ coffee in hand!).

Caffeine is the drug of the masses, easily accessible and probably in far more items than you might realise.  According to the Mayo Clinic across the pond, 400mg of caffeine a day for adults seems to be a pretty safe amount.

That sounds quite a lot, but actually, that’s only about 4 cups of instant coffee (depending on the brand) a day, with levels in ‘proper’ coffee much higher.

That limit is halved for pregnant women (with breastfeeding mothers also needing to keep an eye on their intake). And the American Academy of Pediatrics suggests a limit of 80-100mg for children under 12 years old.

But did you know that a cup of tea (which has about half the amount of caffeine as a cup of instant coffee) has more or less the same amount as a bar of plain chocolate? Wow!

I was also astounded to find out that diet drinks actually have a higher content than their sugary counterparts too! A can of Coke (including Coke Zero) has 32mg while Diet Coke has 42mg!  It tends to be fizzy drinks where youngsters get the most caffeine, although a study in Boston recorded 15% of 2-year-olds drinking coffee!

But, why is caffeine the drug so many of us rely on to get us going in the mornings (and sometimes throughout the day?).  And how does it work its mysterious magic?

Now For The Science Part…

Well, it’s actually pretty straight forward.  If you’ve been to one of my workshops, you may have heard me talk about ‘sleep pressure’.  Essentially, the longer we are awake, the higher the pressure for us to sleep, which is all controlled by a chemical called adenosine.

Caffeine comes along and interrupts the absorption of that chemical in our brains, blocking the sleepy signals.  So although you still have a high level of the sleepy chemical in your system, caffeine has tricked your brain into thinking you’re not tired at all (it takes about 20-30 minutes for the full effect). Clever, no?

Because of all this activity, another part of our nervous system (the pituitary gland) thinks that there’s a problem and fires up our ‘fight or flight’ mechanism by releasing adrenalin.  Which explains why if we’ve had a little too much, we can start to feel our heart pounding or a little shaky (amongst other things).

It also increases the amount of dopamine produced, which is our feel-good hormone.  No wonder we feel happy and hyper all at the same time. I don’t know about you, but it makes me feel tired just thinking about all that activity!

But here’s the biggy… even once we think the caffeine’s worn off, it’s still in our system.  It takes about 5 – 7 hours for our body to process just half of the caffeine.

So that cup of coffee you had after lunch is still circulating in your system by the time you’re putting the kids to bed (albeit not quite at the level it was just after you had it).

Of course, if you had something caffeinated mid-afternoon or even after your dinner, your caffeine levels are still pretty high, meaning most of us are going to have a tough time falling asleep by the time our own bedtime comes around.

Having said that, I’m sure we’ve probably all come across those people who can have a cup of coffee at dinner time and still sleep like a baby.  That’s probably thanks to enzymes in the liver which are responsible for getting rid of the caffeine – some of us just have more efficient versions than others.

So if we think of caffeine like a wall to the part of our brain where adenosine usually has access. When that wall finally comes down, our brains are essentially flooded with the sleepy chemical, as our bodies have continued to create adenosine while we’re on our caffeine high.

So now we’re faced with not just the levels that were what made us reach for a coffee in the first place, but a few more hours worths, while we were ‘under the influence’ – also known as a ‘caffeine crash’.

Naturally we all have different tolerances to caffeine anyway, and it also hinges on just how much we’re used to having on a daily basis (the more you have, generally the more tolerant of it you are, and the more you need to ‘hit that high’).

Apparently, having just 100mg a day (equivalent to approximately 2 cups of tea or one cup of instant coffee) can lead to a dependence on the stuff, with us encountering withdrawal symptoms if we don’t have it, one of which can be (ironically) lethargy.

So, after reading this, are you thinking about switching to decaf?  Well, I hate to tell you, but de-caf doesn’t equate to ‘no-caf’. Even decaffeinated drinks have 15 – 30% of the caffeine found in the fully caffed version.

But, it’s not all bad!  Caffeine (and coffee in particular) have been the subject of various studies over the years, with some suggesting that regular amounts of coffee could actually be good for us.

Apparently (in moderation) it can help with headaches and asthma, not to mention it can help lift our mood (tell me something I didn’t know!…).

There’s even some research that suggests regular intake of caffeine can help prevent Alzheimer’s and Parkinson’s disease.  Although I’m not sure that’s a basis to take up the habit if you don’t already.

There is evidence to suggest though that caffeine increases our metabolism, which can help with weight-loss, but as mentioned above, as our tolerance increases, so the effects aren’t quite so pronounced.

Well, my cup of coffee has now gone cold, so I think I might go and make myself a herbal tea instead…

How Did You Sleep Last Night?

Get my 5 Top Sleep Tips instantly in your inbox to help you get the sleep you need.

Thank you for signing up for my free sleep tips.

Please check your email inbox to confirm. I can't send you the sleep guide until you do!