Are you tired of not being able to sleep? Check out my FREE 5 Day Sleep Academy! 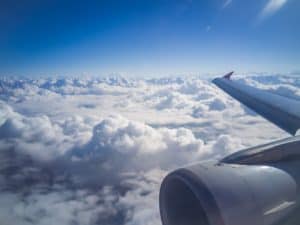 Life with little kids can be challenge. Just getting them out the door on time in the morning can seem like a Herculean task! So the idea of travelling with children can make even the most confident parent a little nervous.

Not to worry, in this post I’m going to share some of the secrets I’ve learned to make travelling with children easier.

The Reality of Travelling With Children

I’ve been lucky enough to fly from London to Orlando twice this year (once for business and once for pleasure). And as you can imagine, each time there were LOTS of children on each flight before or after meeting Mickey Mouse.

Not exactly being shy and retiring, I would often get chatting to some of the parents who would share their tricks and ideas on how they deal with travelling with children, not just the flight, but adjusting to time changes too.

There were other parents though, who really weren’t sure what to expect and were planning on just ‘winging’ it. If that sounds like you, then read on!

Of course, it doesn’t really matter how you get to where you’re going; by plane, train or automobile, travelling with kids is always going to be a different experience to travelling on your own!

Packing for the Journey

My siblings and I fondly remember going away on holiday with our parents back in the 80’s (long before ipads and seat-back TVs, etc, obviously!) and how our Mum would provide us all with our own envelop of goodies as soon as we got on the plane, train or in the car (the size and content depended on how long the journey would be).

In my little world, that marked the start of the holiday! A comic and a few new colouring books would keep us happy for ages. Alas, as I’ve learnt from my girls, this won’t always wash with children these days.

Someone gave me the good advice when I started travelling with my eldest to break the journey down into manageable segments (the length of the segments would obviously depend on the age of your child and their attention span).

For me, I found 20-30 minutes was manageable. So, if we were on a short-haul flight of say 2.5 hours, I would make sure I had approximately 5 ‘new’ activities for them, that could be;

As chidlren get older, you can let them help choose what to take as well, although I always try to slip in something novel without them realising (doesn’t have to be new, maybe just something they haven’t played with for ages or something that wasn’t age appropriate when they were given it).

Try giving each child their own wheelie case that they can fill with the toys of their choice to play with not just while you’re travelling but while you’re away too. Especially when you’re all staying in one hotel room together, this really helps to limit the amount of toys that are likely to be littered around the room when you get there!

But almost definitely the MOST important thing to take for children over about 6 months?…snacks! And plenty of them!

There’s nothing quite as frustrating as being at 30,000 feet, on the motorway or finally settled on the train and your little one starts insisting that they’re hungry when there’s absolutely nothing you can do about it!

Certainly if you’re flying or on the train, I would try to avoid anything that may contain nuts even if your little one doesn’t have a nut allergy, someone nearby might. As well as things that will need to be kept hot or cold or likely to make a huge mess (I learned this summer that whole oranges aren’t quite the easy snack I thought they would be when confined in the car…).

So you’ve survived the journey, now what?

That probably depends on where you are, what you’re going to be doing and where you’ll be staying – a weekend in France staying with family will be a totally different experience to flying to America for 2 weeks to visit theme parks.

Stick to Routine (if you can!)

What I would say is whatever you’re doing, TRY to maintain some sort of routine (even if it’s loosely based on your routine at home).

When travelling in mainland Europe, we’ve always kept our girls on UK time. There’s something really relaxing about them not waking until 8am (even though it’s actually 7am to them!).

It can also help with mealtimes too, as lots of restaurants aren’t even open at 5/5.30pm when they would usually have their dinner.

If you’re going further afield though and are worried about the time difference, you could always try shifting their bedtimes by 15-30 minutes every couple of nights a week or two before you go.  That way, they’re already a little closer to the new time zone so shouldn’t have as much trouble adjusting.

If you’re flying, a top tip from my brother (who is a long haul pilot) years ago, is change your watch to the time of your destination as soon as you get on the plane and start working to that time straightaway.  That can make quite a significant difference, especially on long flights.

Lots of us are really lucky to have separate rooms for ourselves and children at home, so it can be a real shock when suddenly everyone’s in a hotel room together!

As a Sleep Consultant I understand the importance of everyone getting a good night’s sleep. That can be really tough in a hotel room though!

Sometimes, we just need to get a little creative! Certainly, for little ones in cots, it might be possible to pop them in a wardrobe (goes without saying that’s dependant on the size of the wardrobe!), or, if you can, try to rig up some sort of curtain, just so the children can’t actually see you at night.

As lovely as it is to have your children in bed with you, if there are other options (and you don’t want to be still doing it when you get home!), try not to let this happen!

If you’re staying in a cottage or apartment with the luxury of separate bedrooms, don’t underestimate the fact that sleeping somewhere new for little ones can be a little unnerving.

Depending on their age, they might not have slept in many places other than their own bed, so it’s worth taking the time to help them get used to their new surroundings.

And finally, it’s a holiday!  Try not to cram too much in – if it’s exhausting for you, think how overwhelming it will be for your little one, especially if it’s hotter than you’re all used to.

I can say with near certainty, it WILL impact their sleep if they’re not given the opportunity to have at least some down-time each day.

So there we go, a few ideas on how to help you and your bambinos stay sane while travelling.

Maybe you have a few tips of your own you’d like to share? I’d love to hear them! Feel free to post them on my facebook page.  If you’re still a little unsure how to manage your trip send me an email, and I’ll give you some more tips.